I sewed a lot of garments in 2016, close to 40-I have lost track of the actual total. Most of them were for me, some were for others. When I looked back over the year, I found that although I sewed many garments, I actually made several versions each of seven favorite patterns: the Pearl Shift pattern from Green Bee Patterns and six patterns from Made by Rae: the Washi Dress, the Beatrix Blouse, and the Ruby Blouse which I had made before and the Luna Pants pattern , the Isla knit dress pattern and the Gemma Tank which were new to me in 2016. The newer patterns are from a line that Rae calls Presto patterns. They are less expensive and simpler to sew, which is probably why I was able to sew so many! Here are a couple of pictures of some of my makes with links to the patterns and my blog posts about things I learned while making them. I tend to make things in multiples because it is not much more work to cut out two versions than to cut out one.

The Washi Dress by Made By Rae, which I made for myself three times: two versions had sleeves and two versions were in double gauze. I also made a version with polka dots for my sister and a paisley version for my mother. The double gauze, while a bit tricky to work with, makes a wonderful winter version of the Washi. I have my eye out for another double gauze to make another long sleeved version of the Washi. I wear my charm version all the time. 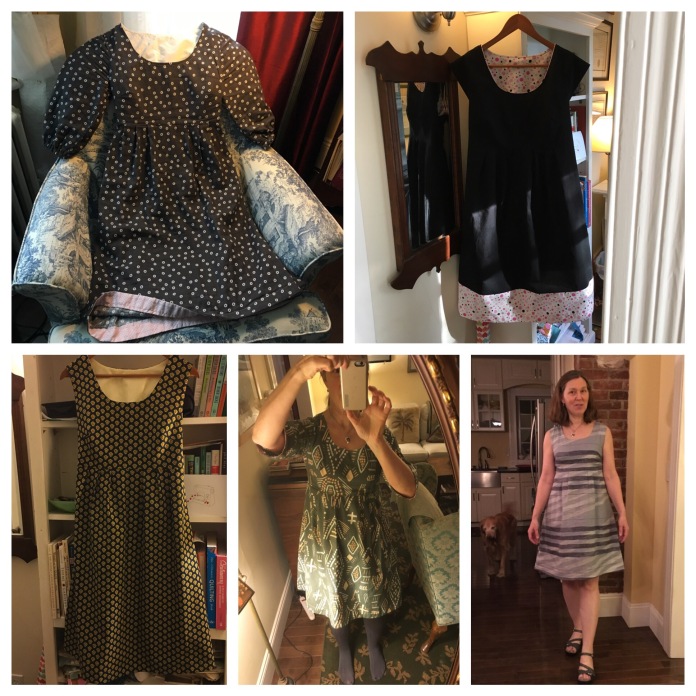 I have two more  Washi dresses cut out that I plan to finish soon. One is the Washi XP with a bow. I cut them out last summer before Gemma Madness took over my sewing life. Finishing my WIPs will be a priority for me this winter.

I am excited to see how the XP version turns out. I think it will be perfect with a sweater and tights and boots for winter. I cut this out way back in the spring when I made a baby quilt for a friend and used this for the binding.

I also sewed several new versions of the Beatrix blouse and modified a shift dress pattern by adding Beatrix sleeves. 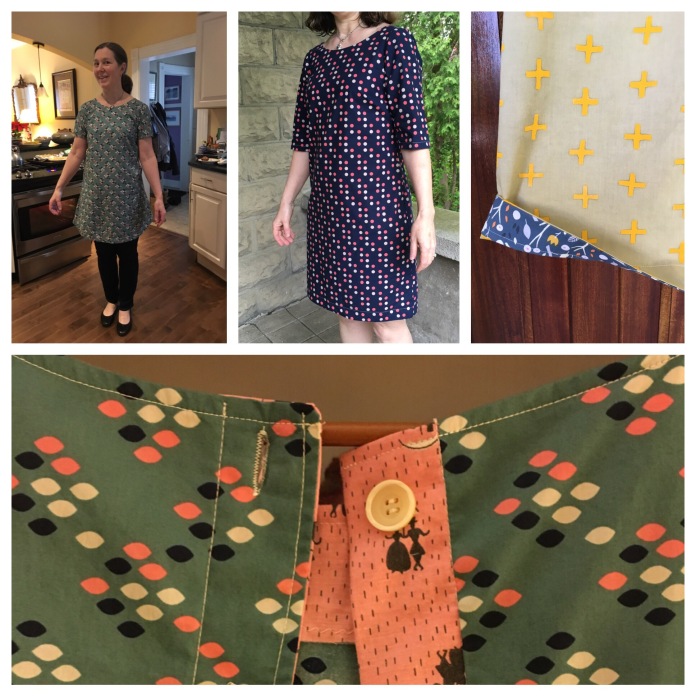 I lengthened the Beatrix to a tunic length using the Pearl Shift pattern as my guide and made this Cookie Book version with a curved hem and this Alison Glass version with an exposed zipper and a straight hem. I wear them all the time with leggings and jeans.

I made the Pearl Shift four times: two in heavy cotton flannel and one each in a cotton-linen blend and in a black and white checked fabric.

I have two more cut out and ready to sew, one for my daughter and another plaid flannel version for me. The original plaid Pearl that I made a year ago in the fall is probably my most worn garment ever.

I surprised myself this year by making pants! I highly recommend the Luna Pants pattern from Made By Rae. I made this clay colored version and this Fringe version, both with fabric by April Rhodes. I lived in them all summer.

I was surprised at how flattering they ended up being and they are incredibly comfortable.

I made three versions of the Ruby Pattern this summer, a plum colored double gauze blouse for me, a double gauze blouse with a yoke made of quilting cotton for a friend and a dress which I love in April Rhodes fabric. I just love her designs for garments. 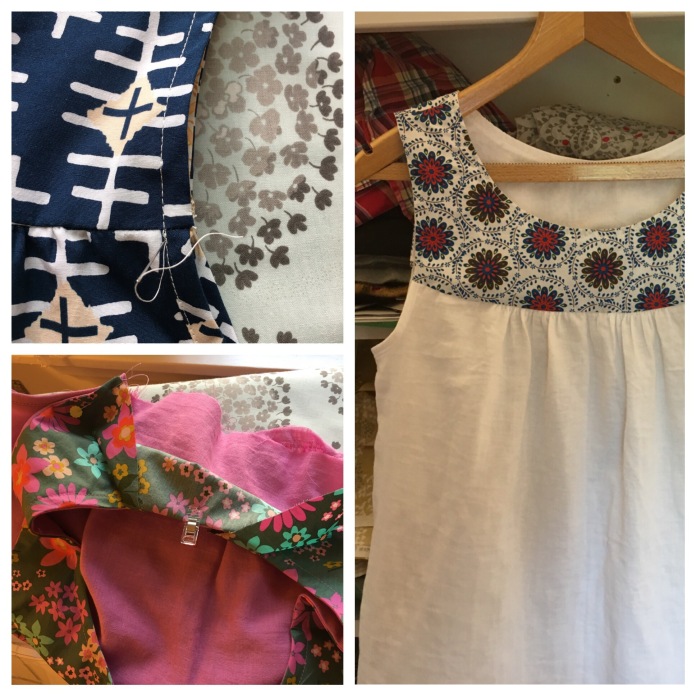 I have several other versions of the Ruby blouse cut out and ready to sew. Sew all the WIPs is going to be my resolution for 2017!

I learned a bit about how to sew knits on a regular sewing machine and made one each of the dress and top versions of the Isla Pattern. 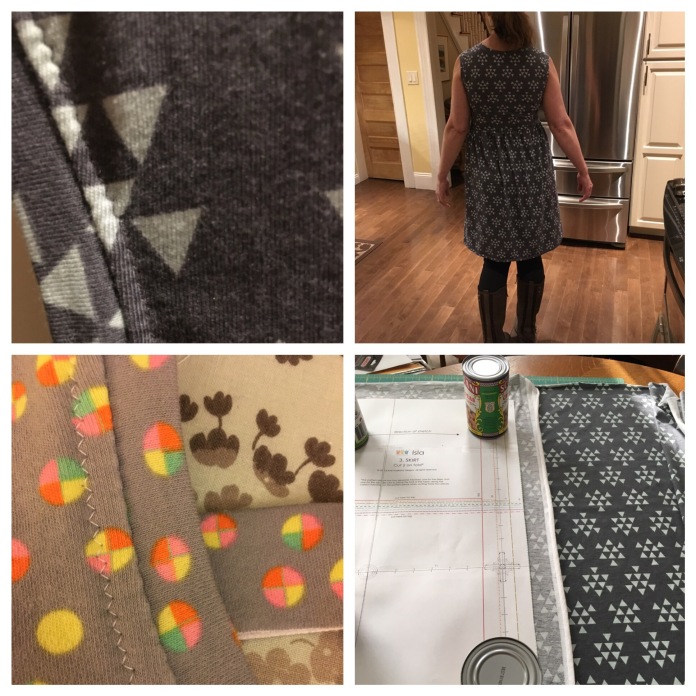 I have several more cut out and ready for an afternoon when I can sew them up. I highly recommend this pattern for those of you who are new to sewing knits.

The pattern I sewed the most though turned out to be the Gemma Tank. Rae launched this pattern over the summer and once she did, all my other WIPs went by the wayside. I literally have things I cut out to sew back in July that never got sewn because I was too busy sewing so many versions of the Gemma. I lined it, I lengthened it, I sewed it for my kids, I sewed many versions for myself. I sewed it out of thrifted men’s shirts and I learned a lot about bias binding. It was a lot of fun, a bit crazy but a great way to experiment with different fabrics. I am wearing them all the time. It has become a great layering piece for me. These are actually not even all of the Gemmas I made. Craziness!

Other non-garment items I sewed this year were this quilt for a much awaited new baby boy-so much fun! and an afghan for my mother in law made from thrift shop sweaters. I also was privileged to be a pattern tester for the first time for this great skirt pattern which will be launched in the new year. I have fabric picked out and ready to go.  It is going to be a great new basic to add to my rotation.

Highlights of my sewing year included Me Made May-which is always fun and which brings so much inspiration from other sewers and a couple of mini-breaks (long weekends,) one in Maine and one at home and a micro-mini break (afternoon) that I spent exploring my old neighborhood. I also read a lot this year and tried very hard to stick to my 2016 New Year’s resolution to commit one day a week to being unplugged. That worked for about half the year and then life got busy and  I ended up having to spend time each Sunday in the office. But I tried to spend at least some of each Sunday unplugged from media, reading, taking walks,, going to church regularly and doing yoga. These are things I hope to find more time for in the New Year.

With best wishes to all for a happy and healthy New Year and time and energy to finish the sewing projects (I know that I can’t cut out one more thing until I sew through the pile I have accumulated of cut out projects, ) and thanks to all for following along with my sewing adventures!