One summer evening, my stepdaughter and I were hanging out and talking and somehow we got on the topic of shorts. I had just made the Made by Rae Rose pattern as pants in a lovely woven Ikat fabric and I told her that I had plans to sew myself some shorts. She mentioned that she had wanted some linen shorts that she had seen in a store that we will just refer to by its initials, U.O., but they cost upwards of $50 which seemed ridiculous, not to mention out of reach for an 18 year old college student and I said offhand, I bet we could sew something similar. And so our summer sewing project was born.

We had talked for a while about doing a sewing project together but I realized that by walking her through sewing a Made By Rae pattern, we would not only end up with a pair of cute shorts that didn’t cost a fortune, but that because of the way Rae writes her patterns, my stepdaughter would learn techniques that would enable her to sew another project mostly independently. And she did! 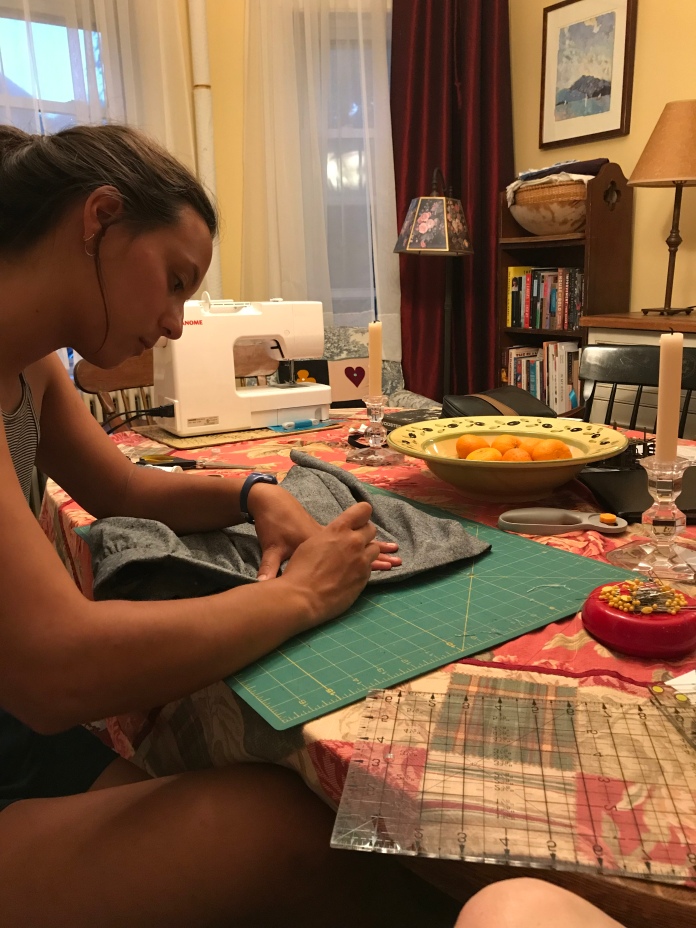 As we sewed she shorts together, I shared my tips. I had a hard time seeing to sew in the ditch when I sewed my waistband with this nubby linen fabric so I suggested that Margaret draw a line of chalk to better see it as she sewed. 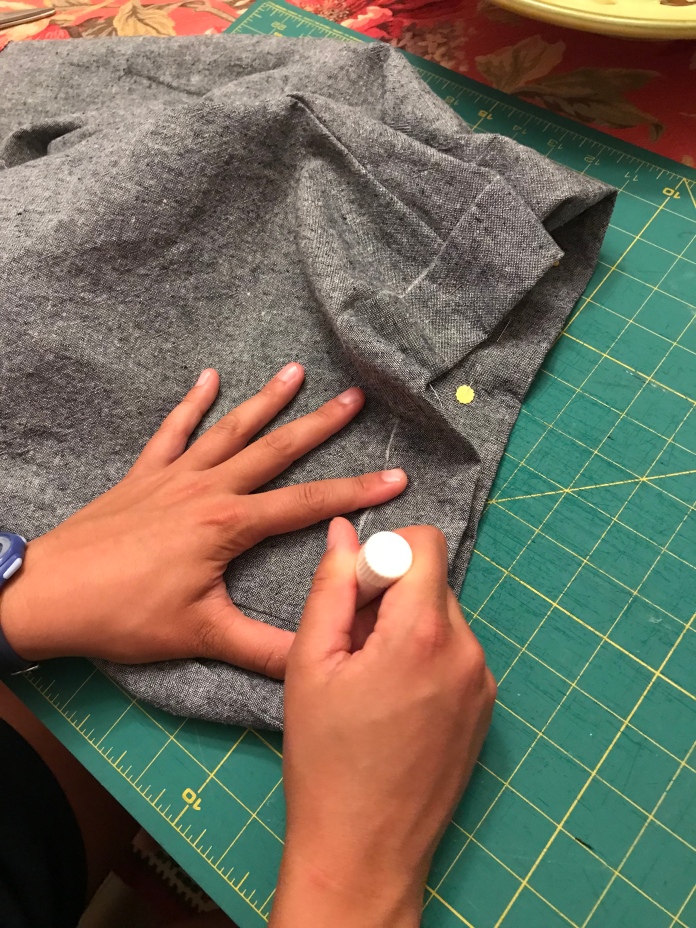 We did most of the sewing in two separate evening sessions of a couple of hours each but prior to starting our project, I had her print and tape together her pattern, read the instructions, measure herself, figure out her size and cut out the pattern pieces while I was at work.  Her measurements put her between a S and M based on the fitting guide in the pattern so I told her to cut between the two lines. This saved me time and was also was a good way for her to get into the project. Then together, step by step, she made her shorts. We would read a step and then I would walk her through it. The MRB instructions were the perfect guide.

She learned how to iron the fabric before cutting and the difference between ironing fabric and just gently pressing a seam after sewing.

She learned what interfacing is and how to fuse it to the pattern pieces.

She learned how to wind a bobbin, thread a needle, what stitch length to use and how to sew a straight stitch and to switch to a zig zag stitch to finish her seams. 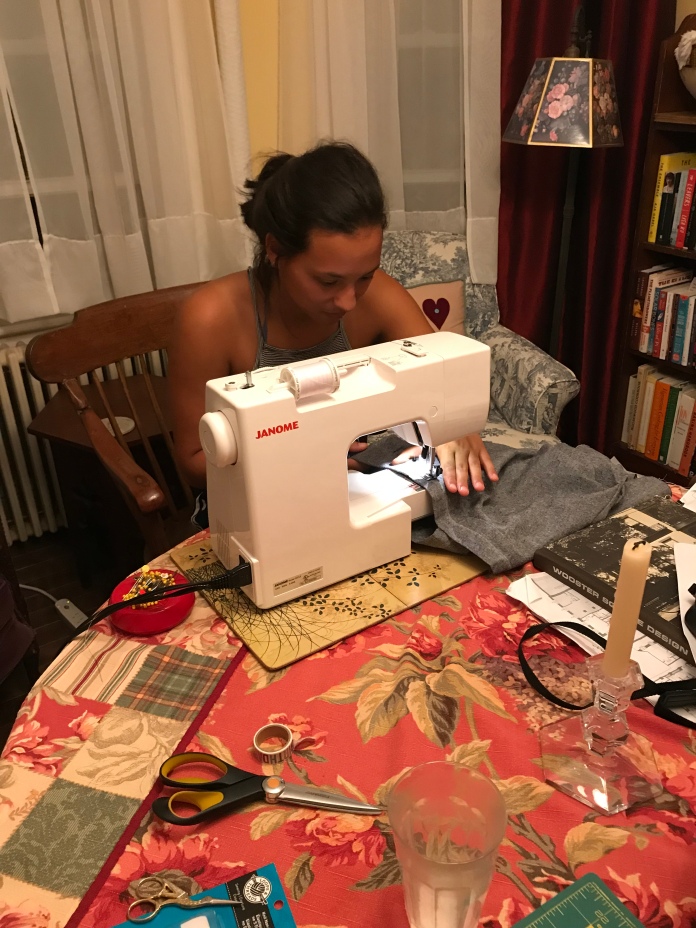 She practiced sewing some straight lines of stitching on scraps of the material before we sewed the garment and learned how to line up the sewing line with the appropriate seam allowance line. She practiced with navy thread and white thread to decide which one she wanted to use for her final project and decided to use white.

And then she assembled the shorts. She sewed the pattern pieces together step by step following the instructions, she learned to sew gathering stitches and gathered the front waistline, she inserted the elastic and finished the front waistband and hemmed them. As she was following the steps she became more and  more independent so instead of showing her a step, I could tell her to sew or press or finish the seam and she was fine doing it on her own.

The only real hitch we had was when the safety pin opened when the second piece of elastic was almost threaded through the waistband.  At that point, she learned that desperate times call for desperate measures.

I ended up taking out a few stitches, opening up the waistband to be able to close the safety pin and then I sewed it back up after we finished threading it through (culprit below). I need stronger reading glasses for close sewing work but in a pinch, doubling up on my regular reading glasses works.

It was great to see her excitement when the elastic was threaded and they started to actually look like shorts!

And she was thrilled with the final product which are completely wearable and cute and fit perfectly.

I asked Margaret to share some thoughts about the experience and this is what she said:

“I had a lot of fun sewing the rose shorts pattern. I’ve always admired the work Julie does making her own clothes, but it seemed like an overwhelming process for me to undertake myself since I didn’t have any experience. The thought of following a pattern was stressful without knowing sewing lingo or techniques, even though it was something I wanted to try.

The rose shorts were a style I really liked and seemed simple enough that I could follow along, so I felt comfortable attempting them as a first project. Rae’s pattern was straightforward and clearly formatted, but even so having Julie there to help and show me the right way to carry out the steps was definitely a key to my success. I was definitely confused a couple of times with how to orient the fabric pieces and keeping track of what part I was sewing together, but now that I’ve done the process once I think I have a better sense for the sewing process.

One of the most rewarding parts of making the rose shorts was sewing the pockets into the front pieces. Having the pockets securely sewed into the main section made the project start looking like a real pair of shorts which was really exciting. It was also rewarding to thread the elastic through the waistband and see the fabric begin to cinch up like I’m so used to seeing but had no idea how it actually happens.

I was surprised how much prep work goes into a sewing project and how little time the actual sewing takes. I learned that paying attention to detail in the set-up, cutting, and piecing together stages is so important because then you set yourself up for success when you do the actual sewing.

Overall it was really fun and I’m so happy with how they turned out! I definitely want to make another pair. the rose shorts are a good pattern for someone just starting out (like me) because they’re simple yet sophisticated.” 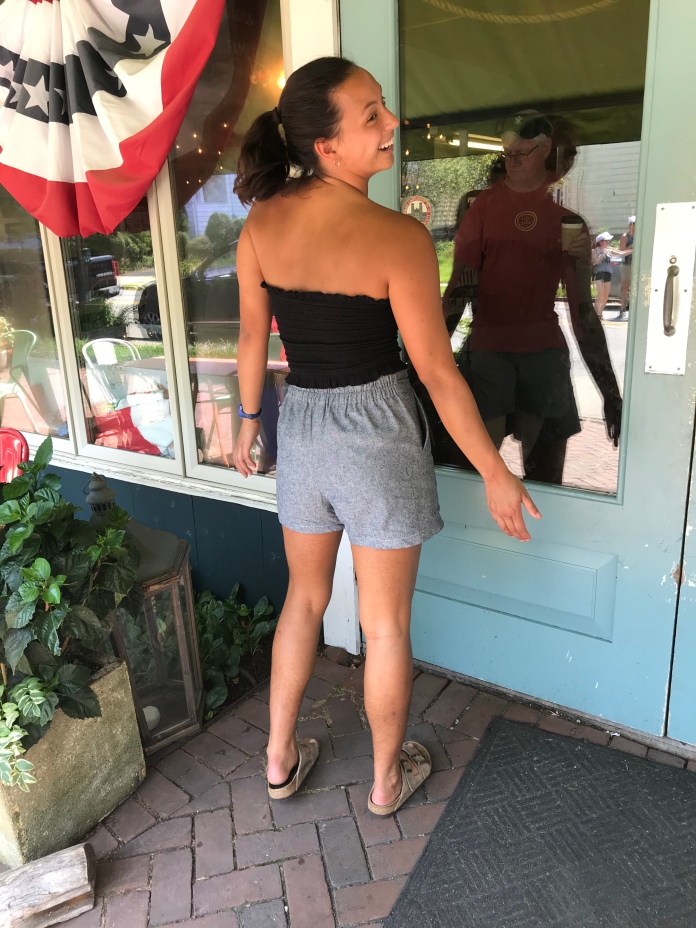 For all of you who have young people in your lives, I can’t recommend this process more highly. Almost any of Rae’s patterns would be a good first pattern but the Rose shorts are so on-trend and include so many techniques: gathering, pockets, topstitching etc. that working through each of the steps teaches basic sewing in an understandable step by step way. The shorts turned out so well that Margaret wore them to the opening of a local art show that her work was featured in. The show is an open juried show called Focus under Forty featuring artwork by artists ages 16-39. Her work has been featured three years running and this year four of her photographs were accepted in the show and one of them won second prize. We are so proud of her! You can learn more about the show here.

As Margaret was sewing her shorts, I was inspired to sew myself a pair as well because hers were turning out so cute. They are the perfect summer shorts. I sewed a Large based on my measurements of 32 waist, 42 hip and they fit perfectly.

The fabric we both used was Essex cotton-linen blend from my stash in two different shades of blue. I subsequently bought that same fabric in a rust color to make myself a second pair. The best thing about this fabric is that it just gets nicer with age.

I also plan to make myself a cropped floral pair inspired by Rae’s version. I couldn’t resist this fabric:

and have made myself a fun rayon version using a floral border print. I used a slightly different approach to better deal with the slippery fabric which I posted about here. Here they are worn with my recently cropped Gemma tank. I am loving wearing them.

So much love for this pattern!

In our house, we now have a new motto: 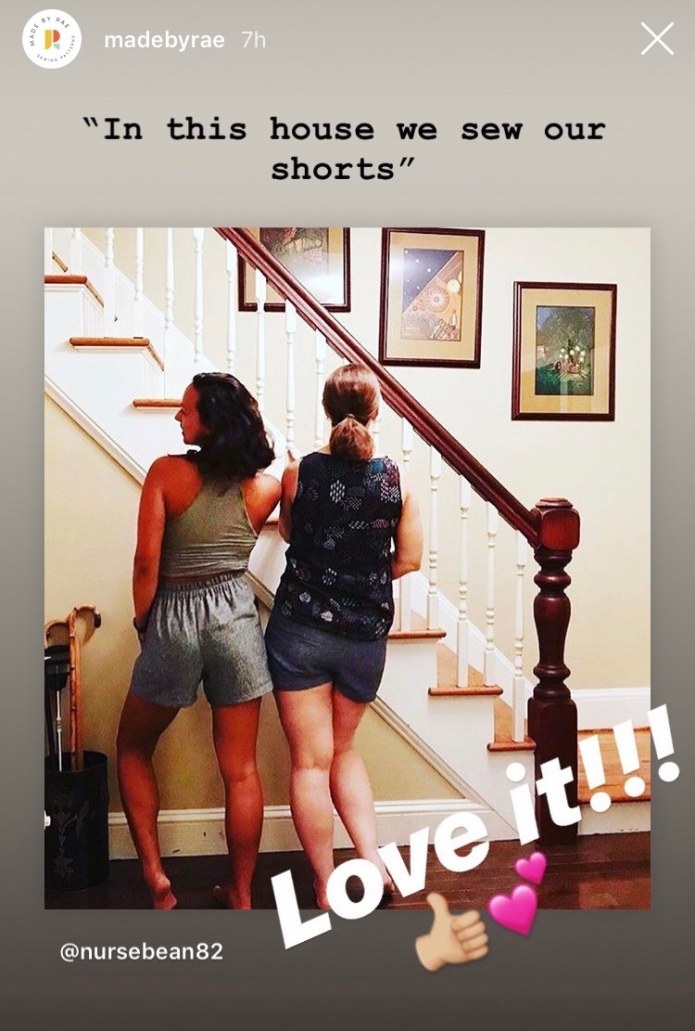