The funny thing about my spontaneous trip to Brooklyn is that despite at least 10 years having passed since I last went to the neighborhood and more than 21 years since I moved away to the suburbs, the trip on the subway from midtown  felt as though I had done it yesterday. It felt as though I was coming home as I did so many days for so many years. 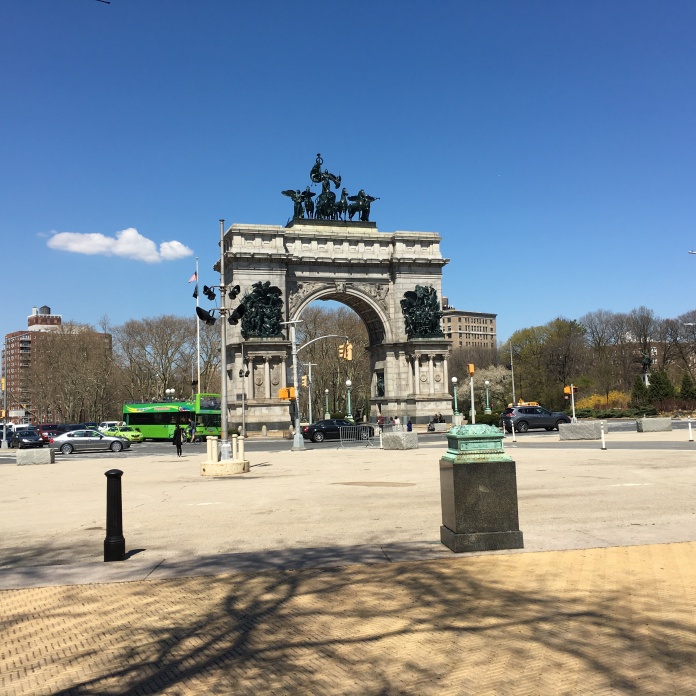 This route was so imprinted on me, it felt as though no time had passed at all.

I actually went into labor with my first child walking up these stairs.  It was 1986, October, the 3rd game of the World Series, and the Mets were playing the Red Sox. I worked on Wall Street at the time and some of my co-workers were listening to the beginning of the game on the radio so I got home a little late. He ended up being born just after the game ended. The Mets had won and went on the win the series. I always said he brought them good luck. 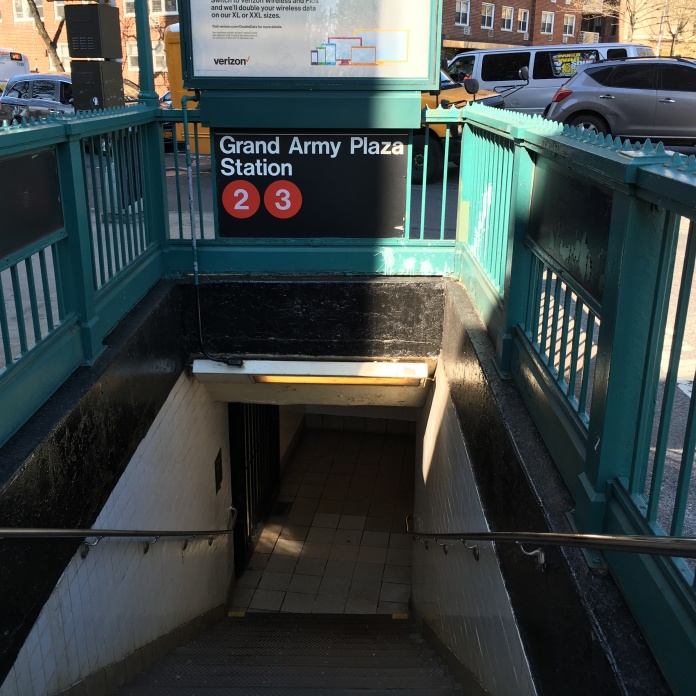 He was three weeks early and I think that the all the walking one does as a New Yorker probably helped that happen. We didn’t own a car for most of the time we lived here.

When I came up out the subway, I instinctively walked down the street and turned right onto Lincoln Place past the Montauk Club.

Our first apartment was on the garden level of a brownstone, #180, on 8th Avenue between Garfield Place and 1st Street. I used to walk down 8th Avenue every day going home. This was the apartment we brought our first child home to almost 30 years ago.

When I lived in the Slope, one of my favorite things was to walk. I would get home from work, get out the the stroller and out we would go. Every street is beautiful.

After three years on 8th Avenue, we moved to 6th Avenue to a second floor apartment. This turned out to be a great move because on the floor above us lived a couple with a child the age of our son. They have turned out to be lifelong friends. We lived at #183 for two and a half years. 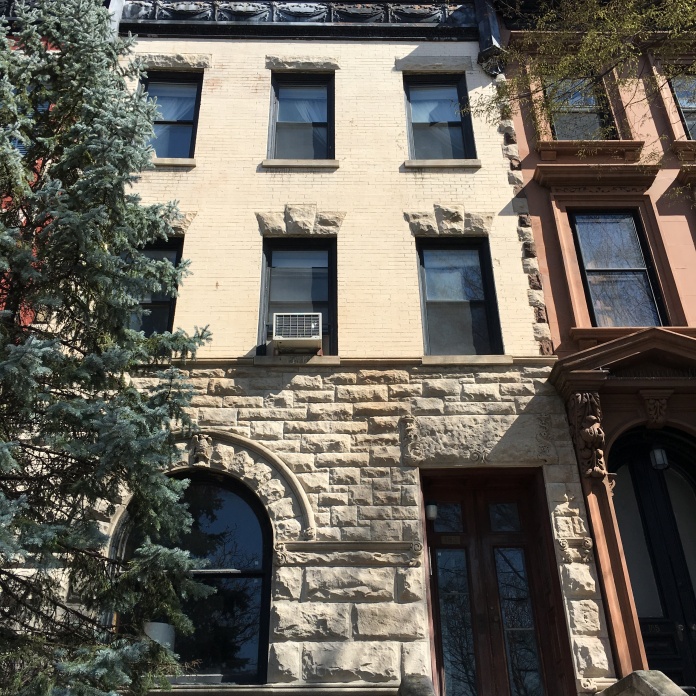 Our landlords were a couple who had two children, one the age of our son, so we had built in playmates. Many happy times were spent on this stoop and chasing our son Steve as he tore around the block on his big wheel trike (shades of coming attractions). Most of his childhood, my main goal was to keep him from seriously injuring himself. It was an ongoing battle. He lived life at top speed most of the time and still does (he is now a bike messenger in Boston and does alley cat races.)

A wonderful thing about the apartment on 6th Avenue was the proximity to this bakery which is still there. I fueled my second pregnancy on chocolate croissants that I got here on my way to the subway. And then took my second child there for regular brunch dates once she was old enough. The bakery has just a couple of tables and some are right next to the open kitchen where the huge mixers bring to mind Maurice Sendak’s In the Night Kitchen. Happy happy memories of this place. Needless to say I gained quite a bit of weight with pregnancy #2. 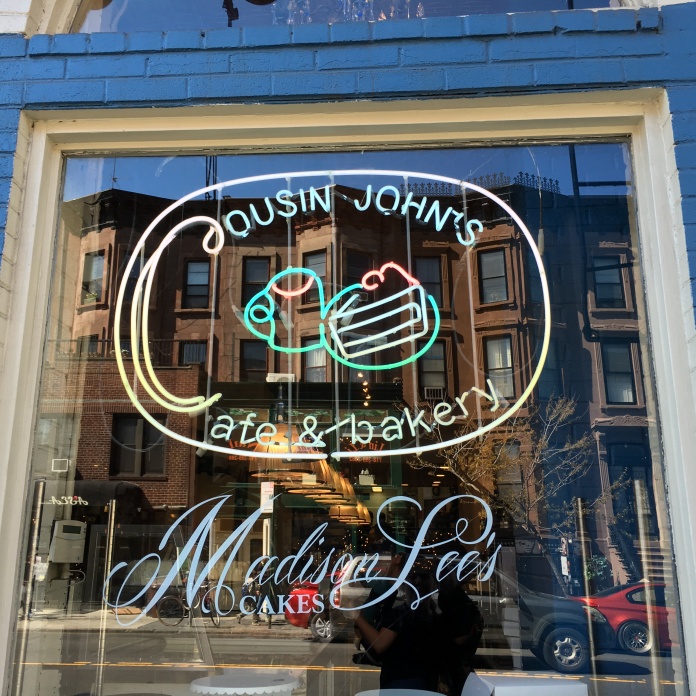 Both of my older children attended a private school in the neighborhood. I walked my son to school every day before getting on the subway. On cold windy days it was quite a walk from our apartment because by that time we had moved to Prospect Park West between 5th and 6th Street. I remember some bitterly cold winter mornings and walking in the rain. We had no car and he just had to walk. Sometimes we would duck into a deli halfway to school to warm up.

My daughter did the walk twice a day because her preschool day ended at noon and then she walked back with our Nanny to get Steve at 3. My kids never had sleeping problems. Between all the walking and playing in the park every day after school, they were tired! I managed to have time to sew most evenings and was a member of a quilting group. Happy times. Evenings in the summer time often found us here. I stopped and got a cone on my walk to celebrate the first real springlike day around these parts.

We would vary our evening walking routes and I never got tired of the architecture. How could you?

Springtime brought gardens and flowers and during the winter, Christmas tree lights would shine through the front bay windows of many of the brownstones.

Everywhere you look there are little interesting details. Particularly when you look up!

Looking at the cars in the picture above reminds me of the three years when a bank reorganization meant I had to commute to White Plains. From Brooklyn. I got so good at parallel parking in tiny spaces because if I passed it by, it might be another 20 minutes before I found another and my babysitter’s meter was running.

6th Avenue near President Street above.

The year we moved was, ironically considering real estate prices now, a tough time to sell a coop apartment in Park Slope and imagine, it was a garden duplex on the Park! #102 below 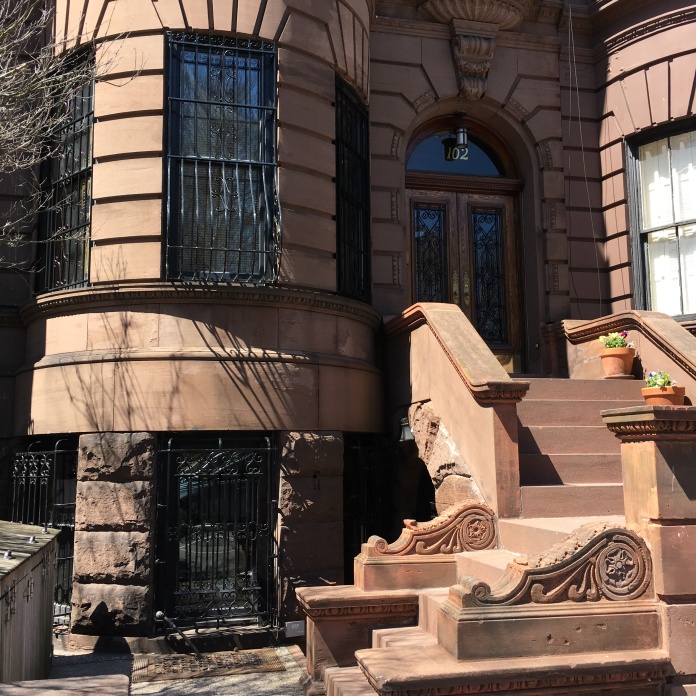 When we got our one offer, we jumped on it but decided to rent for the spring so the kids could finish the school year with their friends. I was at the time 9 months pregnant. 3 weeks after she was born, we moved all of our things into storage and moved our three kids and ourselves into this brownstone  (below) on 1st Street between 7th and 8th Avenue. A professor was spending a semester as a visiting professor in Boston so it worked out for both of us. I am not sure how we did it. It was also right after Christmas. She was born December 23rd. I went back to work when she was 6 weeks old so that we would be approved for the mortgage on the new house in Connecticut and then stopped working two and a half months later. The two months that I spent in the Slope being a stay at home mom were very happy. I had always been a little sad that I couldn’t pick my kids up from school. Living in the city had meant me working full time. Trade-offs! It was really nice to have that time. It made it even harder to leave. That spring our 8 year old son wanted to walk to school alone. It terrified me but it was really only a couple of blocks down the main drag of 7th Avenue. I gave him a quarter each day and he had to call when he got there. Cell phones didn’t exist. He loved the independence. Our older kids had their own rooms for the first time in this house. They had always shared a room and had bunk beds. They missed each other but Stephen’s room was on the third floor and he had a view out the back of the house of lights and cars from 7th Avenue which was new for him. We had always had apartments where the windows faced into the deep middle part of the block since our other houses were all on the Avenues in the middle of the block. This made the rooms much quieter, something I hadn’t appreciated until we rented this house much closer to the commercial area. He liked looking out his window at the lights.

It was fun to see that some of the stores we used to go to are still there. Many $$ were spent here.

We loved the local book store. This was before the days of Barnes and Noble and Amazon.

Here is what they are reading in Brooklyn. I was surprised to see a book that I am currently reading: Lab Girl. Quite good so far. 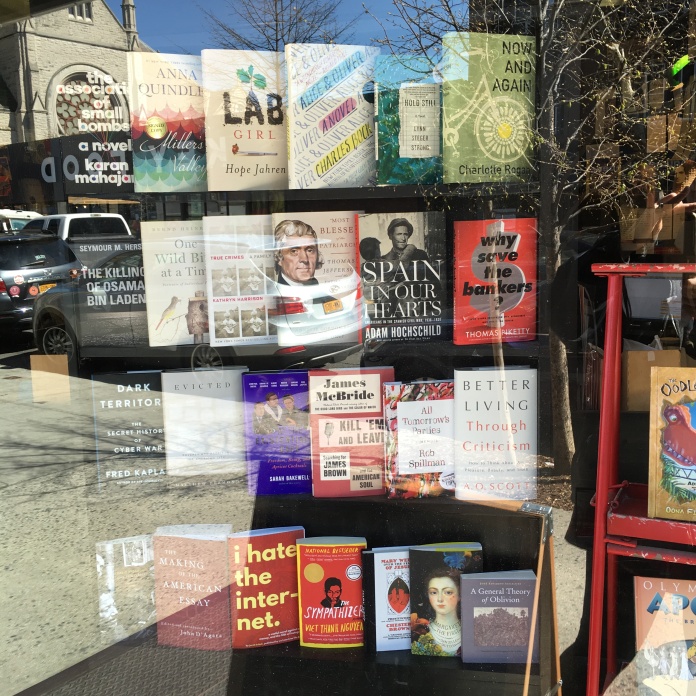 The Clay Pot was where the kids would go with their dad to pick out birthday or mother’s day gifts for me. Great earrings! Everything there is beautiful and one of a kind.

I was telling a friend at work about my day and she wondered aloud if it had been really emotional for me. Surprisingly it didn’t make me sad. I loved that I had so many happy memories of this place and those times and it made me realize that it really isn’t that far or hard to go to. I just need to have an afternoon and subway fare. Til the next time!

3 thoughts on “Nursebean Unplugged: A Visit to the Old Neighborhood Part 2, The Slope”