I have been sewing many versions of the Isla Pattern by Made By Rae since it was released. This is my first real success with sewing knits, partly because the pattern is pretty easy to follow and incorporates pretty foolproof techniques and partly because I gathered up the collective wisdom of the sewing community and put their tips to work. Link here to my first post which contains the aforementioned wisdom and links.

I tend to make multiples of the same pattern. It usually takes a couple of tries to get it right.  Then, once I master the pattern, it is much easier to sew the second and third versions-I have all the pattern pieces, supplies and machine settings all ready to go, so it seems like the efficient thing to do. In the case of the Isla Pattern, I knew that I wanted to sew a couple more versions after being very happy with my first one. I planned to make  two dresses and two tops, one each in yellow and blue.

I ordered the fabric and efficiently I thought, cut out the pattern pieces in an evening. 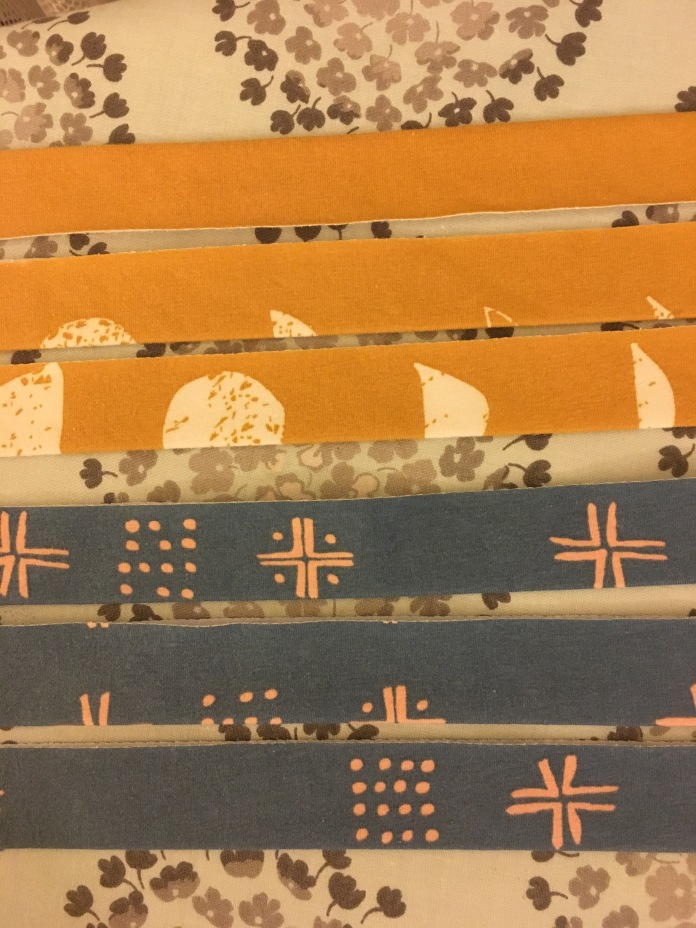 I used the adjustments that I made to my first version which added an inch to the bodice length. 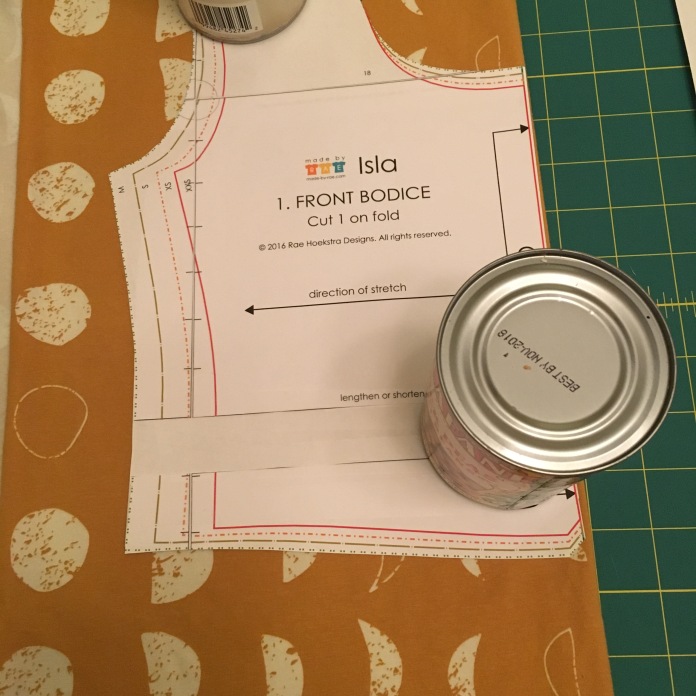 I chose 2 yellow/mustard fabrics, one for a top and one for a dress and a second two blue fabrics with the same plan. 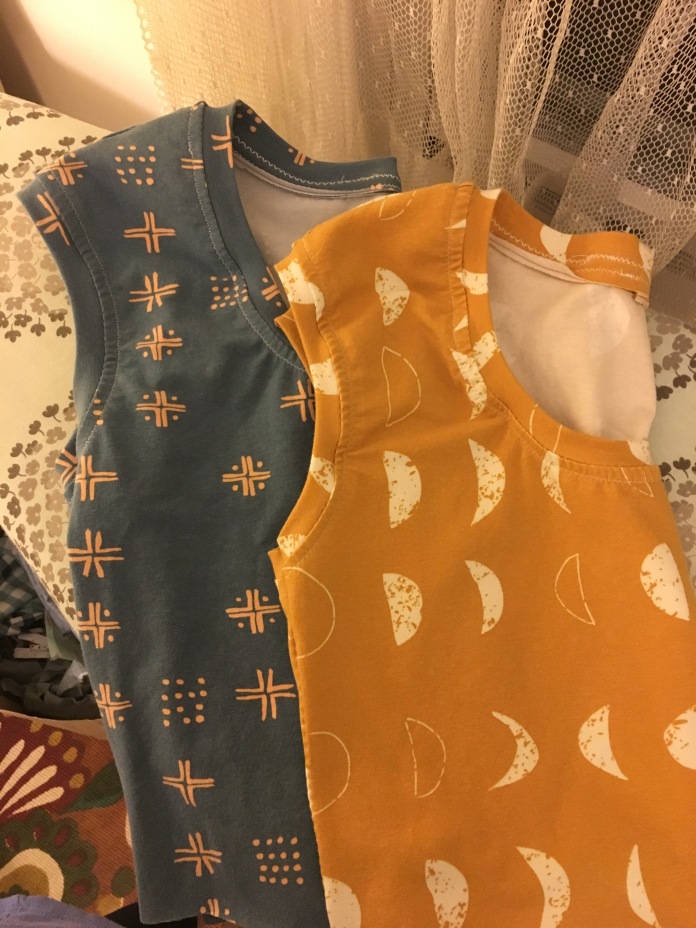 I also wanted a neutral top so I decided to sew one in a cream color. I like patterns that evoke stripes without being completely traditional and I loved this fabric from Art Gallery Knits which I thought would be perfect, so I sewed it first.

It is a really soft nice feeling knit and it sewed up beautifully. I added an inch to the length of the ruffle as well. Here is the finished top. Cute, right? I was happy with how nicely the stripes worked with the neck and arm bands.

Then I tried it on and I was not thrilled. I have a very long torso and so even after adding the extra inch, this hit me way above my natural waist. It didn’t bother me with the dress because it draped nicely but the top didn’t work as well for my shape. Here are some pictures. It’s not terrible but not great and when I wear it, it feels as though it keeps riding up which doesn’t happen with my dress versions. I just didn’t think about the fact that the torso adjustment might be different for the top vs the dress. So for those of you with long torsos, take heed!

If you had told me years ago that I would willingly post less than flattering pictures of myself, I wouldn’t have believed it. For a long time, I stayed out of most pictures, often because I was taking the pictures but also because I was way too worried about taking an unflattering picture. I have to say that being over 50 and being a nurse really changed my point of view. Just having a healthy body feels like a gift. And I so appreciate other sewing pals posting real-life pictures that help me decide if a pattern is right for me. I also love what Allison writes here. It is a must read for all moms. Anyway back to the pictures. Not terrible but not great.

The side view  shows that I probably could have used another 2 or 3 inches. 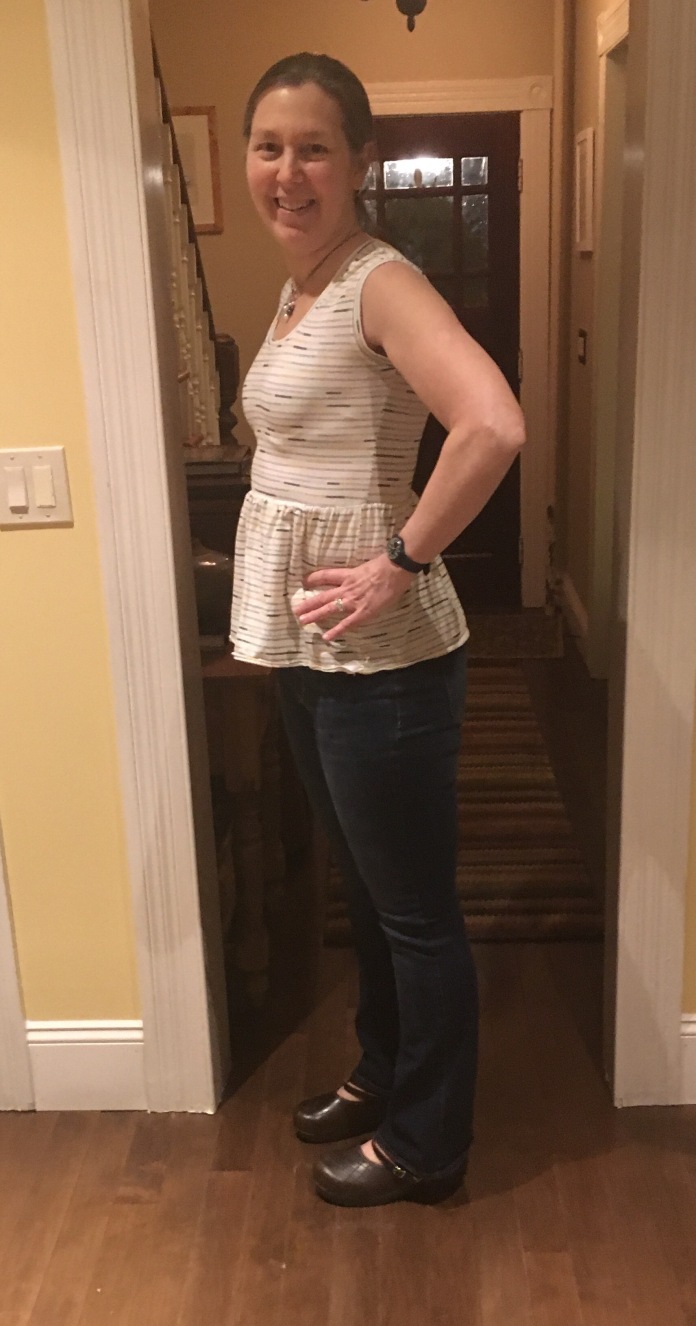 Sometimes being too efficient ends up being a problem because I now had already cut out all my pattern pieces and I knew that those that had been destined for tops would not end up being garments I loved. So I ended up buying another yard each of the two fabrics I had intended for tops. I used the bodice pieces I had already cut and cut the dress length skirt pieces out of the extra yard and have saved the top length skirt pieces for another project. So now I have 2 blue dresses and 2 mustard dresses. With leggings, boots and a cardigan, I am all set for the week. Just to show you how long my waist is, I had my daughter take pictures of my first Isla, which has one inch added to the bodice length and one of the second batch of Islas that has 2 inches added to the bodice length with me putting my hands at my natural waist. 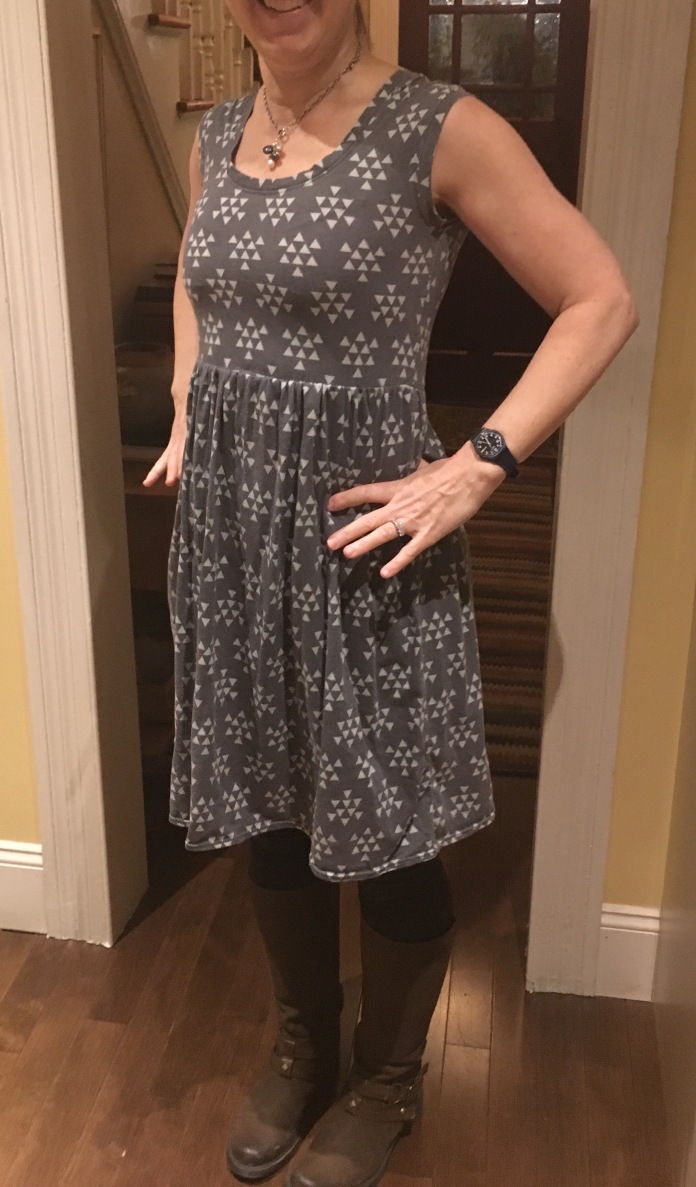 Yes that is really where my waist is. Here is version two with 2 inches added to the bodice.

I can’t actually say I like one better than the other. I think that they are both fine. Word to the wise, make sure whatever you add to the bodice, you subtract from the skirt so you end up with the right length. I think the Isla is most flattering above the knee. I actually am not sure that adding the extra length to the bodice really makes a difference for the dress. I know that some people don’t like the high waist style but I find it skims right over my midsection which I like. I think if I try the top again, I will add enough to the bodice to actually have it hit my waist. That would be a lot of inches.

Here is another top version that I made from fabric in my stash. This is a slightly heavier weight cotton and I think it drapes well.  This isn’t long enough either but its cute! 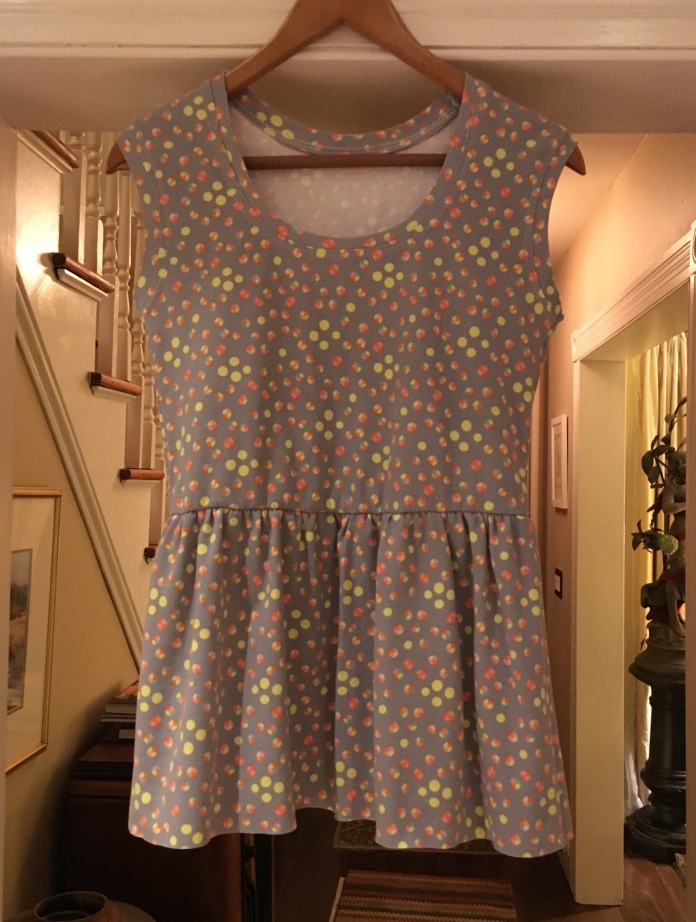 I haven’t hemmed it and I am not sure if I will because I need the length. Here it is on. I love the fun print. I think the top would be fine a bit longer. 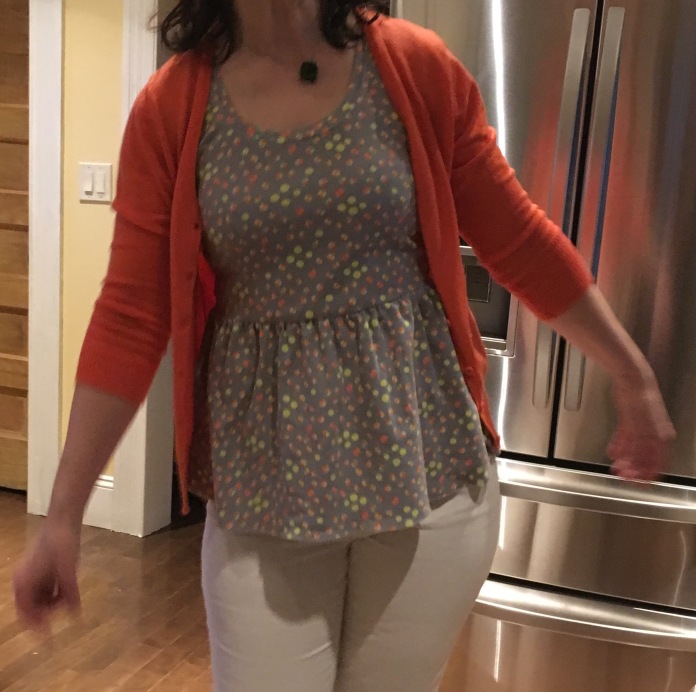 Sewing this many versions gave me the chance to figure out which techniques I prefer for the arm and neck bands. I ended up following Rae’s directions for the arm bands but stretched a bit more as I sewed. I don’t pin. 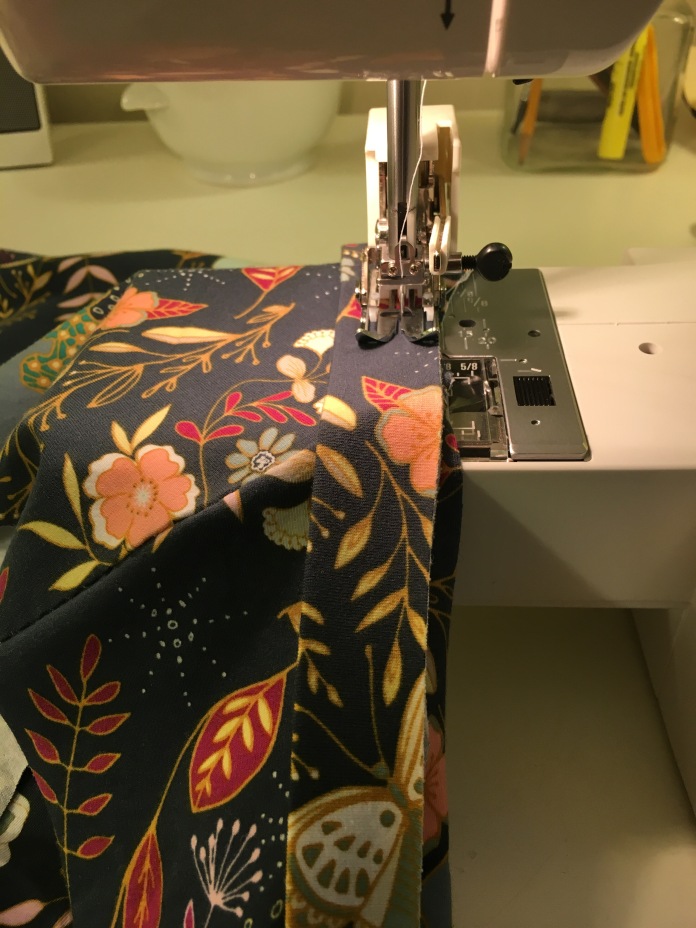 I ended up using about 1 inch less than the band as cut. This gave me a nice fit. I sewed a narrow zig zag along the seam.

This gives it a nice finish. I used a double needle for one of my tops and I don’t think I love it that much more than the zig zag, which is so much quicker.

For the neckband, I tried the technique in the pattern which has you sew just one shoulder and then add the neck band and then join the second shoulder and neck band as a unit. I found for me that I ended up with a bit of bulk so I used Erin’s approach but started with the neck band cut the length specified in the pattern and then stretched a bit more than the pattern would have you do because I had gaping with my first Isla and I generally have to do a hollow chest adjustment with my other MBR tops. I ended up using about 1-1.5 inches less than the neckband length specified in the pattern but it worked for me. Here are the finished dresses. All the fabric is from Hawthorne Threads which has a great selection of knits. 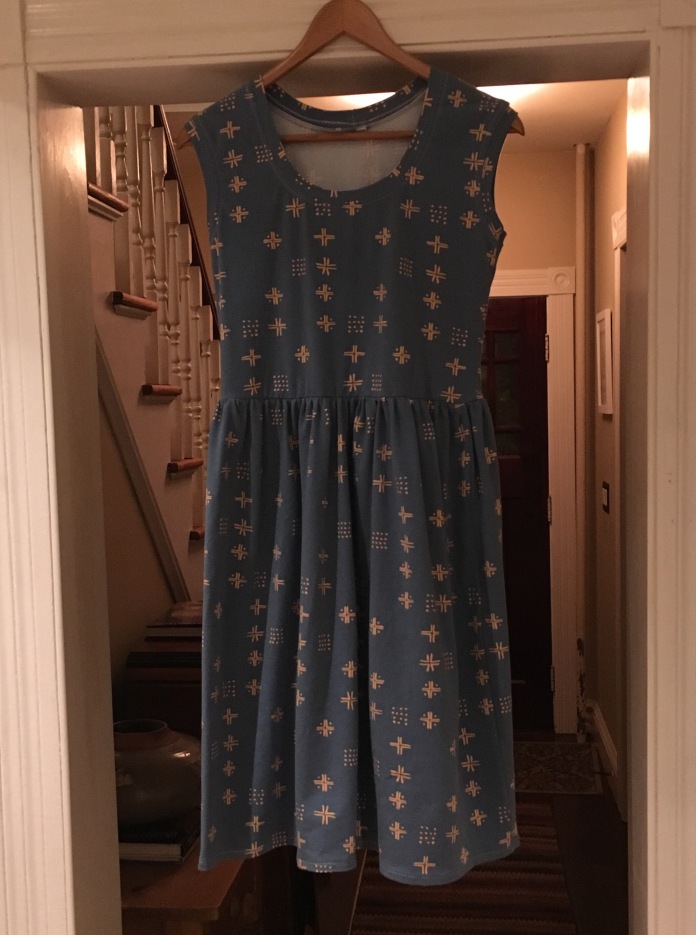 And as worn and in action (whirlwind photo sessions with my husband was more like dress as modern art.)

The wrinkles in the shoulders above are due to my poor posture, not the pattern. Growing up my dad used to tell me to put my shoulders back and now my daughter does.

This one might be my favorite. It was supposed to be a top with jeans because I thought the bunnies might be too childlike but it makes a great dress.

Just be careful when you cut out the neck band to not cut the bunnies in half as I did at first. I cut a new neckband when I noticed my mistake.

This pattern is a quick sew that makes a flattering, comfortable, cute dress that doesn’t need ironing and looks great under a labcoat. What could be better?

I think I have now gotten sewing with knits out of my system for a while and am ready to take the walking foot off the machine, switch the needles and get ready to sew with wovens again. There is a great new skirt pattern that is just about to be released and I can’t wait. Here is the version I sewed when I tested the pattern. 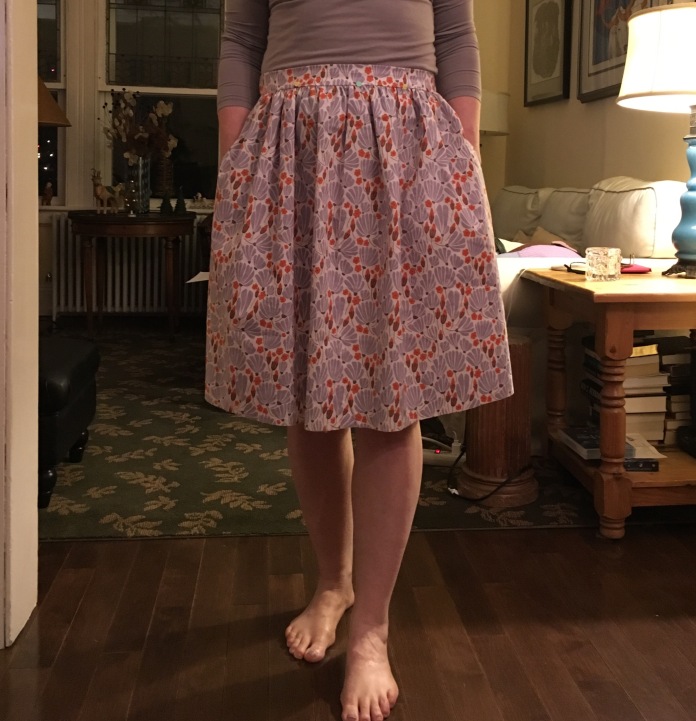 I have some beautiful fabrics lined up to sew a couple of versions, just in time for spring. But in the meantime, my Isla capsule wardrobe will be just the thing to get me through the winter.

12 thoughts on “Sewing with Knits 102: An Isla Capsule Wardrobe”